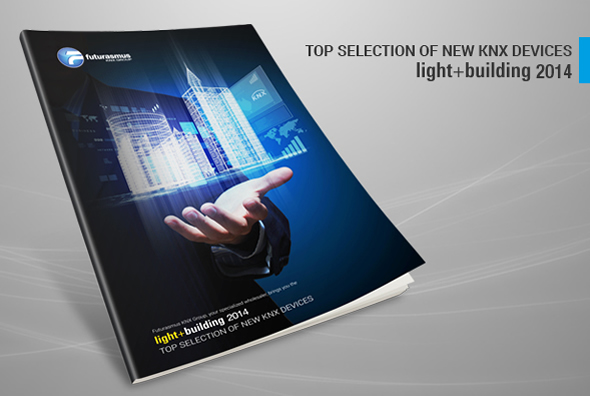 As it has already become a tradition, Futurasmus KNX Group, an international KNX wholesaler, is releasing its much-appreciated summary of the most important new KNX devices presented during this year’s edition of the light+building fair. A number of members of the Futurasmus team, mostly KNX tutors from China, South Africa, Middle East, Germany and Spain, […]

Perfect motion detection re-defined The aim was to find a new dimension: the ideal detector with high-frequency technology for outdoor use. What resulted was the new iHF 3D sensor from STEINEL PROFESSIONAL – for precise detection outdoors. The active sensor detects human walking movements in a radius of 8 metres with equal precision from any […]

The new KNX Energy Sensor provides targeted measurement and monitoring of energy consumption. Values and data can be stored over months and years. Clear graphics and statistics give an open overview. This enables the user to identify possible savings potential at a glance, thereby optimising their energy use accordingly. Significant energy savings can easily be […]

Online management of DALI systems The new B.E.G. KNX/DALI Gateway can use KNX to control and manage not only DALI electronic ballasts, but also DALI emergency lights. Control via IP access to the gateway is very straightforward: here, all connected DALI components are shown in overview. System setup can now also be carried out on […]

Gira is expanding its appealing Esprit switch series with new materials. With the Gira Esprit linoleum-multiplex design line, the solution provider for modern building technology is offering equipment variants made of renewable raw materials for the first time. At Light+Building, linoleum surfaces will be shown which consist of natural raw materials which are even 80% […]

Easy KNX visualisation without engineering effort With the pureKNX tci presents a new series of touch panels with an integrated graphic user interface for KNX installations. The ETS programmer parametrises the visualisation directly in the native ETS dialog. Neither plug-ins nor external engineering tools are necessary. The configuration is stored completely in the touch panel. […]

Systems Integrator, Elektro Hering GmbH, won first prize for its project ‘The Intelligent Hotel’. Awarded by the ZVEH, ZVEI and KNX Association at the Light+Building show in Frankfurt in 2014, the prize was in recognition of the energy efficiency, system integration, innovation and user-friendliness of the project. Visitors to the show were able to see […]

By Yasmin Hashmi, KNXtoday.  This year’s Light + Building took place between 30 March – 4 April, had a record 2458 exhibitors and attracted a record 211,500 trade visitors from 161 countries, with nearly half coming from outside Germany. Admittedly, a lot of the exhibition space at Light+Building is dedicated to electrical equipment and decorative […]