Light+Building 2014 30 March – 4 April 2014 Frankfurt, Germany www.light-building.messefrankfurt.com Light+Building is the world’s biggest trade fair for lighting and building-services technology and presents solutions that cut the energy consumption of a building at the same time as increasing the level of comfort. At the fair, everything is represented, from LED technology, via photovoltaic […]

Zennio’s KNX solutions were featured at the international exhibition, Batibouw, which took place at the NPO Brussels (Belgium) Centre from 21st of February to 1st March. In this trade show, where the main focus of attention turned to construction, decoration, renovation and interior design, Zennio presented the new series of Capacitive Push-buttons, Touch-MyDesign. Touch-MyDesign is […] 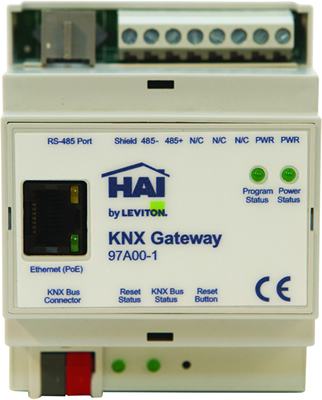 HAI by Leviton announced today the launch of its KNX Gateway, an interface allowing HAI by Leviton’s Omni and Lumina Ethernet-based controllers to communicate with and control KNX devices through KNX’s standardised network communications BUS protocol. Lighting devices, temperature and energy management, motors for window coverings, shades, shutters and more are among the many KNX […]

City & Guilds, City College Plymouth and world leading engineering firm ABB have come together to introduce a series of short courses for plumbers and electricians. The courses are designed specifically to help learners familiarise themselves with the KNX Standard, the worldwide market leader for home and building control. KNX Technology (approved as EU, International, […]

With ACS790 V9.0, the Siemens Building Technologies Division introduces a new version of its engineering and commissioning tool for HVAC plants. For the first time, version 9.0 supports the offline engineering of HVAC plants. Extensive preparations in the office significantly reduce the amount of work installers must perform at the construction site, allowing commissioning to […]

The Siemens Building Technologies Division used this year’s ISH, the leading international trade show for building, energy and air conditioning technology, to present its innovative products and systems for energy-efficient and comfortable building operation. The highlights, shown under the trade show motto ‘Efficient solutions for a better world,’ included solutions for plant and room operation […]

By Gordon Fry, Wandsworth Group. Once upon a time, the idea of being able to communicate with your home from the other side of the world was the stuff of science fiction. These days, thanks to KNX, it is a completely deliverable, easy-to-operate and flexible home automation solution. As the world’s only open standard for […]

By Ben Hobbs, H3 Digital. Phuket is a tropical island in Thailand visited by more than five million holidaymakers each year. After nearly a decade of visiting, UK businessman Dennis Bacon found an elevated parcel of land for sale on the East coast that featured a stunning 240-degree view of Phang Nga bay. He purchased […]

Dr KNX: What does it take to become a KNX installer, and what software tools are available?

By Dr KNX. Welcome dear KNXers to my new column. Every month, I will do my best to answer a question posed by the KNX community, in the hope that it will help you with issues that commonly arise. To get the ball rolling, I will deal with a question that is regularly posed by […]