A challenging home automation project at a home with an equine centre in the Scottish Borders has seen two members of the KNX UK Association working closely together. The result is an installation that has fully met the aspirations of the property owners. It has also demonstrated how any electrical contractor in the early stages of using KNX can offer clients all the lifestyle and energy saving benefits of the technology. 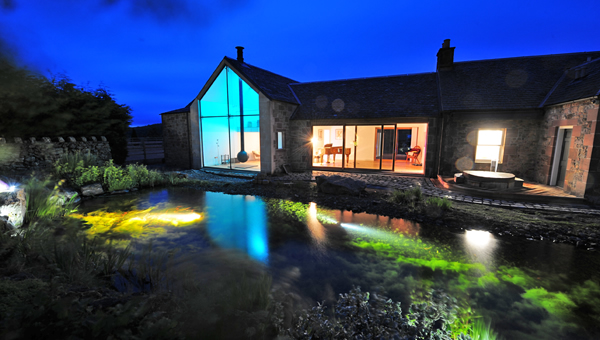 Beasons of Dolphinton, Peebleshire was established to offer a complete one-stop shop for technology in the home and commercial buildings. Recognising the potential of KNX, and following accredited training with KNX Consultants and Ivory Egg, the company achieved KNX Partner status and subsequently became members of the KNX UK Association.

For its first KNX project, Beasons was approached to install a KNX home automation system that would help to maximise energy savings and provide lifestyle benefits in a barn conversion. The owners also wanted the flexibility to be able to extend the system into an adjoining cottage and across the property into an equine centre and a garage. Seeing the potential complexity of the project, Beasons called upon the expertise of fellow KNX UK member KNX Consultants, who had previously provided them with the KNX Partner training.

Ben Lewis, Owner of KNX Consultants comments: “The prospect of embarking on a KNX project for the first time can be daunting but KNX Consultants will provide all the necessary support. The service we offer can be used by any installer. We can help them in their initial KNX projects and build their confidence in implementing KNX. We have the expertise that will enable an installer to pitch for a new KNX project or to fulfil a contract. We can also work with them on a long term basis, undertaking their KNX work whilst they focus on their own specialities.”

KNX Consultants provided documentation that covered everything needed on site to carry out the installation. This included the interconnection schedule, distribution panel layouts, a list of specialist KNX materials, a list of definitions of the function of sensors and a wiring schematic for the electricians to follow.

One of the prime requirements of the initial home automation system was that it should be easily expandable and also be able to accommodate extra functionality at a later date. This has been achieved with KNX which was initially installed in the barn conversion and then extended in stages into the stable block, the property’s original cottage adjoining the barn and the garage.

As the installation developed, Beasons completed the work on-site and KNX Consultants were able to undertake the commissioning remotely via the internet, ensuring minimum disruption.

In the barn conversion, KNX is used to control the lighting and heating, as well as the motorised operation of the roof lights that provide automated ventilation. The property’s intruder alarm system was also integrated and this has enabled the owners to manage energy consumption closely by using the PIR motion detectors (when not being used for intruder detection purposes) and timers to ensure lighting and heating are only used when needed. The owners’ AV system has also been integrated via the user interface.

The original design of the KNX installation has enabled all these features to be easily added. Key to the operation of the system is the conveniently located wall mounted touch panels which the owners use to control all the KNX functions.