Eelectron SpA is delighted to introduce the latest additions to its portfolio, namely: the Universal Dimmer 4 Channels x 300 W; the Presence Detector with Lux Meter; and the Fancoil Controller 0-10V. All these products have been released this month. 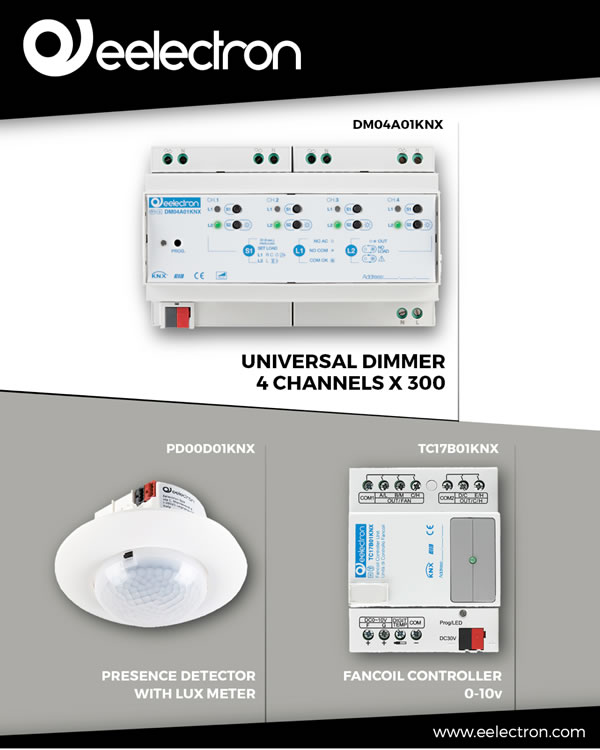 DM04A01KNX is a KNX universal 4-channel power dimmer with automatic identification of load type and with settable parameters to optimise control of different lamps such as LED, incandescent and halogen, CFL dimmable lights, and low-voltage lamps with electronic or ferromagnetic transformer.

Each channel of DM04A01KNX can be used in one of the following configurations:

• Trailing Edge: The dimmer turns off part of the final part of the waveform of the input voltage resulting in reduced lamp output. This load regulation is used for resistive or capacitive loads (typically halogen lamps with electronic transformer or incandescent lamps).

• Leading Edge: The dimmer turns off part of the initial part of the waveform of the input voltage, resulting in reduced lamp output. This load regulation is used for inductive loads (typically ferromagnetic transformers or toroidal).

The device is a presence and motion detector with integrated brightness sensor. The device communicates via KNX. It is designed for ceiling mounting.

The Fan Coil Unit Controller is used to control fan coil units, floor heating or switch actuators. Depending on the design of the device, fan coil units are used in 2-pipe or 4-pipe systems. It controls up to 3 fan speeds (relay or 0-10V outputs) as well as heating or cooling valves (proportional or electrothermal valve) respectively.

The mode of control is based on two-step control or a time-discrete PI controller with setpoint/actual value comparison. The valves and the fan can be regulated directly by devices via the closed loop of this controller. When the Fan Coil Unit Controller is used in floor heating, it can control up to seven channels. All of the floor heating channel control uses a time-discrete PI controller with setpoint / actual value comparison.

Products are in stock in our Warehouse and in the UK with our partner Home Of Technologies.