Connected – secure – convenient. This year’s motto of Light + Building 2018, the world’s leading trade fair for architecture and technology, picks up on the current themes in these fields. In Frankfurt am Main, digital technology meets pioneering design to create the future of building technology.

The specialists and system integrators act as a link between Jung and the end customers as well as guarantors for a high-quality installation solution, also on the subject of KNX. With simple commissioning, intuitive operation and secure communication, we are laying the basis for future-proof building automation.

KNX installations become more secure against unauthorised access with KNX Secure. KNX IP Secure and Data Secure stand for secure data transmission in KNX installations. KNX Data Secure causes selected KNX telegrams to be authenticated and encrypted, regardless of the medium. The communication between the devices can thus not be interpreted or manipulated. KNX IP Secure also encrypts the data communication in the network and thus guarantees the secure transmission of all KNX telegrams. Communication with visualisation systems is therefore even more safe.

Smart functions for a smart server

An extensive update has now made the Smart Visu Server even smarter. The new functions not only increase convenience but also security. The user can thus further adapt his smart home to his individual requirements.

A key argument is secure remote access. This guarantees encrypted data transmission for control via smart devices from any location. At a glance, the user can check from anywhere in the world whether he has left his lighting on accidentally or whether the shutters at home have been lowered when it gets dark. Safe and reliable. The possibility of presence simulation also serves the safety aspect. Through programmed lighting and blind control “according to schedule”, the presence of the homeowner is suggested to potential intruders, even when nobody is at home. The new astro function increases the level of convenience as it enables the lighting and blind control to be carried out dependent on the position of the sun. The switching times are adapted automatically to the changing positions of the sun during the course of the year. Using the Jung Smart Visu Server app which is available for iOS and Android, the user receives direct access to his Jung Smart Visu Server and thus to the KNX visualisation. The Smart Visu Home operator interfaces enables the intuitive operation of the individual functions and actions. Individual settings or adaptations can also be carried out simply by the user. The use of smart devices can be carried out in a portrait or landscape orientation so that the represented functions can be optimally adapted to the size of the display.

Reinforcement for the Smart Control range

The elegant Smart Control 5 presents itself as a current extension of the Smart Control range. Due to its narrow, compact design, it fits in any conventional flush-type box. With a high-resolution touch display, the functions are conveniently operated. 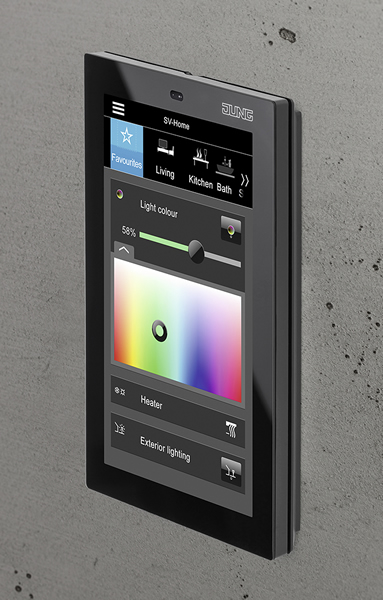 In terms of its functionality, the small Smart Control 5 is in no way inferior to its “big brothers”. With the pre-installed apps for the visualisation servers “Jung Visu Pro”, “Smart Visu Server” and “eNet Server”, the operation of the building technology is simply convenient. The integration with the door communication can be implemented via combination with the Siedle Smart Gateways. The high-resolution graphic display is reminiscent of the latest smartphones in terms of its appearance, colour brilliance and sharpness. Through an integrated proximity sensor, the display “awakes” from its idle mode if the user wishes to operate it. A brightness sensor automatically adapts the display brightness to the respective lighting conditions in the room. The Smart Control 5 thus proves to be the optimum addition to the visualisation and operation in any room.