With the new PlanoSpot 360 KNX DE, ThebenHTS is presenting the first presence detector on the market whose detection area can be displaced mechanically. As a result, the PlanoSpot KNX is the ideal presence detector for rooms where a flexible layout is important. But the PlanoSpot KNX impresses not only because of the variable, square detection area, but also because of the new “eco plus” function for maximum energy savings. 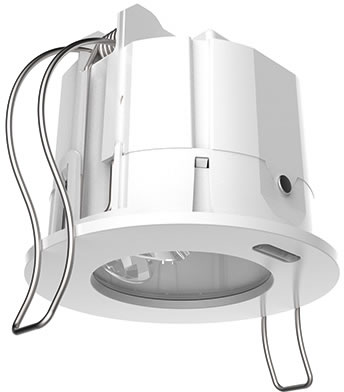 It operates smartly and unobtrusively, the new circular PlanoSpot KNX presence detector from ThebenHTS. With just 3 mm in height and 76 mm in diameter it really is not noticed at all on ceilings of single room and open plan offices, classrooms and conference rooms. Its extensive performance features are all the more noticeable. PlanoSpot KNXm e,g, PlanoCentro or thePrema, features the proven square detection area that not only makes layout in the room easier, but makes detection with no gaps possible as well. However that’s not all: As the one-of-a-kind detector on the market to date, the mirror optics in its housing can tilt to the left and to the right by up to 12°. The entire detection area can be displaced by up to ± 1 m as a result. The advantage is obvious: If the layout changes, the detection area can be adapted. And if the PlanoSpot KNX detects more than required, its detection area can be reduced from 64 m2 to 22 m2 by remote control or by means of ETS parameters.

The importance of good lighting at the work station has been confirmed by experts many times over already. But in practice it often looks different. Poorly lighted work stations are frequently the rule. The effects may be headaches, poor concentration and vision disorders like visual snow. Here, presence detectors like the PlanoSpot KNX produce relief. First, the presence detector tracks the brightness in the room non-stop. To this end, it measures at three different points: The central light measurement detects the brightness directly below the detector, while the two other light measurements detect the brightness in the vicinity of the window and in the interior. The presence detector differentiates between daylight and artificial light in the process. If the amount of daylight is too low to achieve the minimum brightness desired, the detector increases the amount of artificial light. So the brightness level in the room always remains constant. With the PlanoSpot KNX constant light control without the presence effect can be selected as well. This is a function that is for example already used in hospitals, museums and schools.

There are considerably more functions in the small housing with the butterfly clips than one might at first imagine. With the “eco plus” function, different control parameters are adjusted to obtain a maximum in energy savings. The “brief presence” function detects when someone is only briefly in the room and switches the light off not after the usual 25-minute time delay initially configured, but as early as after two minutes. The “self-learning time delay” function learns from the user’s motion patterns: If a person moves more frequently, the time delay is decreased. If the presence detector registers just slight movement, it extends the time delay to up to a maximum of 20 minutes. Thanks to the “teach-in” function, the lux values at which the detector should switch on can be quickly and easily defined even without specialist knowledge. By way of the “integrated room monitoring” function, facility management always knows the rooms where work is still being performed.

Starting in September 2015, the new PlanoSpot 360 KNX DE will be available in the colours White, Black and Silver. Special colours are also possible subject to surcharge. A separate surface-mounted frame is available for surface-mounted installation.