This year, at the largest Light + Building event, the KNX Award was presented for the 12th time. Two thousand guests were in attendance for the occasion. Thirty-eight KNX projects in the field of building automation were selected and nominated from a large number of applications by a top-class jury. Eight of them ended up receiving the globally coveted trophy after being introduced by renowned laudators and then announced as the winners. Another central theme of the award ceremony was climate protection: with “Plant-for-the-Planet” founder Felix Finkbeiner in attendance, the KNX community made a commitment to plant 20,000 trees. 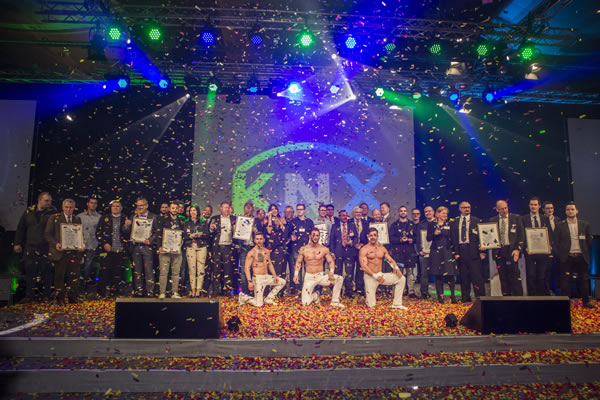 Finkbeiner also served as a laudator and, as with the who’s who of the industry, did not miss the opportunity to personally congratulate the KNX Award winners. Other renowned laudators included Hans-Georg Krabbe, Country Managing Director at ABB Germany, Ron Zimmer, President and CEO of the Continental Automated Buildings Association (CABA), Karl Heinz Bertram, Vice President of the German Association of Electrical Contractors (ZVEH), Michael Blackman, Managing Director for Integrated System Events at ISE, and Ian Richardson, President of KNX National Group Australia.

The KNX Award is the most important international accolade for building automation. Since 1994, the KNX Association has been awarding the prize for the world’s most pioneering smart building projects. “Never before has the KNX Award been more international than it is today: experts from 62 countries applied for it. This is a new record!” says an impressed Franz Kammerl, President of the KNX Association, with respect to the strong interest shown by the industry and the competition’s increasing international character.

The 2018 KNX Award projects are located in the US, Dubai, Norway, Finland, Greece, Switzerland and Germany. In addition to extensive installations (such as for the largest leisure and amusement park in the Middle East, a health centre in Norway, the National Opera and National Library in Greece and a smart city project in Finland), intelligent residential buildings are also among the award-winning projects. These include a renovated villa in Beverly Hills, USA, an energy-plus house in Volkach, Germany, KNX IoT applications in a Swiss smart home as well as the study of an energy-efficient micro grid for smart homes.

The 12th KNX Award ceremony took place on 20 March in the Panorama Hall of the Frankfurt Trade Fair as part of Light + Building, the world’s leading trade fair for building services technology. In addition to the trophy and certificate, each 2018 KNX Award winner received a prize of 1,000 EUR.

Category: International Europe
The Norwegian city of Tromsø now not only has the northernmost university and cathedral, but probably also the northernmost KNX installation to date. In the newly built TromsøHelsehus, a health centre, KNX devices control and regulate the entire building technology. The installer and system integrator, Oslo-based Instell AS, relied on KNX’s broad range of products for the implementation phase. In the three-storey, 6,300 square metre building with medical practices, laboratories and patient rooms, KNX automates the lighting, HVAC systems, shutters and blinds, security surveillance, and energy management. A special feature is the central control system for patient calls, door and window contacts, bed sensors, and presence detectors in the patient rooms.

Category: International Asia
KNX has long been at home in Dubai – and that’s not just because the Total Automation company is based there. Now the smart home and building provider has successfully applied for the 2018 KNX Award with the Dubai Parks & Resorts project; in other words, the installation of the largest leisure and amusement park in the Middle East. On an area of around 30 million square metres, more than 12,000 KNX devices control and automate all of the functions for three theme parks, 19 Bollywood studios, the Rajamahal Theatre and, with its 503 rooms and villas, the Polynesian Lapida Hotel & Resort. The organisation of the extensive topology and the integration of different protocols enable a reliable and energy-effi cient solution with central visualisation.

Category: International Africa, America & Australia
In the US state of California, Beverly Hills is a prominent place where the typical villas are larger, more spacious and more stylish – and therefore a challenge when it comes to renovation. The system integrator Domvision, Belgium and California also had to sway KNX sceptics during the KNX installation of an existing villa. In combining US products into the KNX system, uncharted waters were being tested. The result? More lighting comfort, HVAC automation, pool control, an alarm system, video surveillance, gate control, home entertainment, and operating concepts with design buttons, touch panels, visualisation and tablets. Domvision developed its own apps on the Iridium platform for this all-round solution that can’t be ignored.

Category: Publicity
The KNX Award for Publicity recognises the public impact of KNX projects. The smart city of Kalasatama in Helsinki causes a quite a stir. A district for 25,000 inhabitants and 10,000 jobs is being created on an industrial wasteland. The vision for Kalasatama includes intelligent solutions for building technology, energy management and transport. They will enhance quality of life, energy effi ciency and the climate friendliness. To this end, the city of Helsinki has developed a smart city concept that also plans to create interactive ecosystems through intelligent networking. This is where the Internet of Things comes into play, and it’s already a reality thanks to KNX IoT. The 2018 KNX Award for Publicity goes to the City of Helsinki for implementing the smart city concept.

Category: Young
The Young Award honours experimental projects coming from young people. In the course of an internship, students from the TU Munich developed a micro grid with their project partner iHaus AG in the 2016/17 winter semester. It is intended to ensure effi cient energy management in private households. Electricity consumption is to be controlled in such a way that in-built energy producers such as photovoltaics are primarily used, while grid energy is used in a secondary capacity. For ﬂ exibility with functions such as smart metering, visualisation, power detection, load monitoring, mobile operation, etc., the KNX smart home building technology is linked to the IoT world. The resulting “iHaus Micro Grid” taps into the ways of the future – especially with regard to electric mobility.

Category: Energy Eficiency
An LEED Platinum certification marks the highest class of sustainable buildings. KNX contributes to this at the Stavros Niarchos Foundation Cultural Center in Athens, Greece, by effi ciently controlling 15,000 lights. Opened in 2017, the cultural centre is home to the National Opera House and National Library. Renzo Piano’s architecture aims to reduce energy and water consumption. In the light-ﬂ ooded halls, constant-lighting regulations save artifi cial light. Automated shading reduces the amount of necessary cooling. Lighting scenes provide for a feel-good atmosphere and safety. Operating and control concepts with visualisation support effi cient use of the building. With this KNX project, the system integrator Eibshop Greece made a successful application.

Category: People’s Choice
At the People’s Choice Award, the audience has the final say. The selected KNX project from system integrator Casaio GmbH near Würzburg doesn’t just make an impression from the outside – what’s inside is equally noteworthy. As an energy-plus house, it produces and saves more energy than it consumes. Profitable photovoltaic systems, economical thermal pump heating, balancing buffer storage and intelligent cooling concepts contribute to this. As the backbone of home automation, KNX integrates the individual systems and manages the energy ﬂ ows. In addition to the classic subsections such as lighting, heating and shading, KNX also controls garden irrigation, the alarm system, the multi-room system and access control. A facility server with visualisation serves as the control centre.