Light + Building is the world’s leading event for the sector – and impressive demonstration of this was given yet again by the latest edition of the fair in Frankfurt am Main from 18 to 23 March 2018. A total of 2,714 exhibitors (2016: 2,626*) from 55 countries launched their latest products onto the world market. Altogether, more than 220,000 trade visitors (2016: 216,610*) from 177 countries made their way to Frankfurt Fair and Exhibition Centre to discover the latest products, solutions and trends offered in the fields of lighting, electrical engineering and home and building automation. “Over the last six days, Light + Building presented a plethora of innovations. Everyone involved – exhibitors, partners and visitors – were delighted with the fair and this positive mood was prevalent in all halls. The upswing in the sector continues”, said Wolfgang Marzin, President and Chief Executive Officer (CEO) of Messe Frankfurt, summarising the fair. 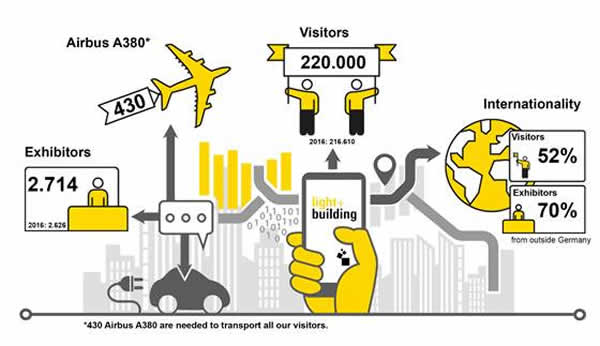 The level of internationality rose again in comparison with the previous edition of the fair: 70 percent (2016: 67 percent) of exhibitors and 52 percent (2016: 49 percent) of visitors came from abroad. The biggest visitor nations after Germany include China, Italy, the Netherlands, France, the United Kingdom, Switzerland and Belgium. Large increases in visitor numbers were registered from countries such as the Russian Federation, India, Finland, Korea and Ukraine. There was also a significant increase in the number of attendees from Kazakhstan, Angola and Namibia.

All participants gave the fair top marks for quality. Thus, at over 80 percent, the overall level of satisfaction remains very high. 90 percent of exhibitors said they considered the economic outlook to be good. In the case of German exhibitors, no less than 94 percent said they think the outlook is bright. The overall level of satisfaction on the visitor side is event higher and once again reached 97 percent.

The participants of the 3rd Intersec Forum in Frankfurt am Main were in the right place at the right time to tackle future-oriented topics. The Conference for Networked Security Technology ended today (23 March) after welcoming 650 participants and generating a great echo from the industry and the building-services and security technology sectors. Virtually all participants (94 %) were satisfied with the event and three quarters of them said they intend to visit the 4th Intersec Forum in March 2019. The 650 conference participants came from Germany and other European countries. Last year’s two-day Intersec Forum attracted 180 specialists to Frankfurt.

The final report from the fair, further conference information and images can be found at www.intersec-forum.com/final-report-2018.

Around 240,000 visitors thrilled by Luminale in Frankfurt and Offenbach
Held concurrently with Light + Building, this year’s Luminale, Biennale for Lighting Art and Urban Design, was characterised by a new concept with 149 projects, light installations, performances and discussions in five categories – ART, COMMUNITY, STUDY, SOLUTIONS and BETTER CITY – on the programme. Around 240,000 visitors came to the venues in Frankfurt and Offenbach. Particularly popular was the Light Walk in Frankfurt city centre. The ninth edition of the festival was coupled with a debate on urban challenges in the 21st century.

Summaries from the sector:

Michael Ziesemer, President of the German Electrical and Electronic Manufacturers’ Association (Zentralverband Elektrotechnik- und Elektronikindustrie e.V. – ZVEI): “The role to be played by intelligently connected devices and systems in residential and functional buildings and how they contribute to greater safety, security, convenience and energy efficiency was to be seen clearly at this year’s Light + Building. Digitalisation was the all-embracing subject, together with the resulting potential for new services and business models. Light + Building 2018 came up to the high expectations of the ZVEI exhibitors.”

Lothar Hellmann, President of the German Central Association of Electrical and Information Technology Contractors (Zentral-verband der Deutschen Elektro- und Informationstechnischen Handwerke – ZVEH): “Light + Building not only fulfilled our high expectations. It exceeded them. Nowhere else are more innovations and impulses for our sector to be found in this quality and density. Moreover, this year’s motto, ‘connected – secure – convenient’, fitted perfectly with the most important markets for the electrical-engineering trade. And, with our special show, ‘Smart Living in the E-House’, we offered an ideal example of what is possible today in terms of building connectivity, systems integration and energy management – for more safety, security, convenience and energy efficiency.”