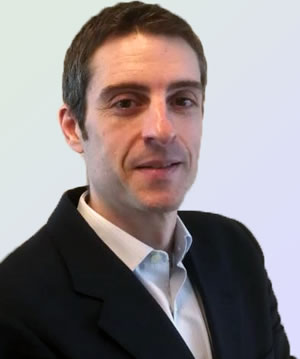 If you want to see the world of KNX at its most impressive, Light + Building (18 – 23 March, Frankfurt, Germany) is the show for you.

This biennial show is the world’s largest trade fair for lighting and building services technology, and it is here that KNX really shines. New products are launched, existing products are displayed in a wide range of applications, there are plenty of educational events, and joyous celebrations. The enthusiasm generated by KNX Association staff and volunteers, as well as KNX manufacturers and professionals, is infectious.

This really is a massive show of which KNX is an important part, so if you are thinking of attending, it is essential that you plan your visit in advance.

In this exclusive interview with KNXtoday, the KNX Association’s Marketing Manager, Casto Cañavate, gives some useful pointers on how to make the most of the show.

KNXtoday: What is the main KNX highlight of the show?

CC: This year our main theme at Light + Building is KNX Secure. Cyber security is a hot topic, and we want to emphasise that professionally-installed KNX systems are fundamentally secure. KNX is the only standard for smart homes and smart buildings that meets the highest global security requirements for cyber security, and it offers maximum data protection for smart buildings.

As automation in buildings becomes more complex, installations are more sensitive to attack, so the need for security increases with the threat. Thus, at Light + Building 2018, we will see the first KNX Secure devices that have come on the market by KNX Members, who are presenting these new products at both the KNX Association booth and at their own booths. The most recent KNX Secure solutions, that can be applied in residential and commercial buildings, will also be presented to visitors by KNX Professionals, as well as demonstrations of how easy it is to create a KNX project in our famous ETS programming tool using KNX Secure devices.

KNXtoday: What else will the KNX IoT city in the Galleria offer?

CC: In addition to the aforementioned KNX Secure, the KNX IoT city booth will present:

On show will be the results of our joint work with our liaison partners, Thread Group and The Fairhair Alliance, towards a secure IoT Building Automation Platform that serves the needs of multiple building automation solutions.

The Thread Group will explain how its technology can serve to extend classic KNX installations with a field bus IPv6 network, allowing constrained devices to exchange KNX standardised data on the Thread wireless mesh network, behind the Thread border router, making the connection to the classic KNX world.

KNX RF is fully programmable with ETS, and is secure. The KNX RF Panel will demonstrate a selection of available KNX RF devices for turning a home into a smart home without the need for additional cabling.

In addition to demonstrations of ETS Professional with Secure features, we are showing the new Smart Home Planner. This bridges the gap between end users, installers and manufacturers. For beginners, it facilitates the first step into the world of KNX, and for professionals, it offers the possibility of planning KNX projects with their customers – vividly, comprehensibly and individually. Manufacturers can also draw attention to their products by providing them within the illustrated catalogue of the KNX Smart Home Planner.

And, since Light + Building is special, look out for special offers on ETS at the booth!

Semantics at the ETS Area

It’s crucial that devices can understand each other, and that humans can understand what a device or service offers. Understanding the meaning of data (semantics) is necessary in order to be able to combine functionality to create new functionality. Semantics allow devices and services to interact at different levels. For example, a wall switch might directly operate a specific light bulb, while a mobile phone app might put the building in ‘out of home’ mode, thereby indirectly operating the same light bulb.

The current KNX system allows this by creating a project with ETS, thereby relying on KNX standardized data types to combine several products/functionalities. At Light + Building we will show how, for the IoT, it is important to be able to share this semantic information outside the boundaries of the KNX ecosystem.

The Training Area and the Championship

Getting started with KNX has never been easier. Visit the KNX Training Area, get in touch with KNX Training Centres from all over the world, and see how you can start your career with the world-leading protocol for smart homes and buildings!

For those with a little more experience, try your luck at the ETS Championship! It’s an open competition, held non-stop every day, in which you need to set up an installation within 20 minutes. There are many attractive prizes to be won, and you can register here.

Check the KNX training, presentations and competitions timetable for a list of events.

KNXtoday: What other KNX presentation, training or fun activities will there be?

CC: At our main booth in the Galleria, we will offer more than 60 KNX presentations and training, every day and in different languages. These will include:
• KNX Secure, KNX Secure solutions and Securing KNX projects using BMS.
• IoT Security for Commercial Buildings, IoT: from a group address to semantics.
• KNX RF.
• ETS Apps.
• and much more, such as typical aspects of installing KNX, KNX and the future Smart Grids, AI and KNX, etc.

Check out the full agenda of presentations at the KNX IoT city booth.

In addition, there are over 25 presentations of KNX at different events within Light + Building.

But that’s not all. Also on offer, non-stop, are:
• The ‘Who will win the ETS?’ game: Challenge your knowledge about KNX, ETS and KNX Association and win ETS5 Professional!
• KNX IoT game: Come and participate at the KNX IoT city in the IoT lottery game. No difficult questions, just try your luck at the buzzer and wait for the KNX IoT game to pick your prize!

KNXtoday: Where can visitors see more KNX products and solutions?

CC: With more than 420 manufacturer Members worldwide, KNX Association will again offer them a platform for demonstrating their latest developments. In addition to 150 KNX Members with their own booths at Light + Building 2018, there will be two separate KNX Member community booths in Hall 8 F98 and Hall 11.1 C92, hosting 28 KNX Members from 9 different countries.

KNXtoday: Will the Smart Living Germany stands in Hall 9 B30 be of interest to overseas visitors?

CC: This area is dedicated to Smart Home Initiative Germany, which is proudly presenting the winning projects of its annual Smart Home Award. The booth offers visitors a deep insight in the world of smart homes, including trainings, solutions and demonstrations. Do not miss this booth, in order to see ground-breaking smart home innovations ‘Made in Germany’!

KNXtoday: What can visitors learn at the KNX Secure stand in Hall 9.1 E14?

CC: This stand is dedicated to KNX Secure. KNX has developed new security concepts: KNX Data Secure and KNX IP Secure, both of which are based on worldwide established security protocols and can be integrated seamlessly into existing KNX systems.

In addition, just in front of this stand is the Intersec Forum, a conference held in German and English from Monday to Thursday (19-22 March), which covers ‘Digitalisierung und Sicherheit im Gebäude der Zukunft’ or ‘Security Meets the Smart Building’. On Wednesday 21 March, between 10:00 – 12:30, KNX Association staff will present some great sessions on KNX Secure.

KNXtoday: What is your advice to first-time visitors about planning their visit?

CC: First, make sure you plan time enough to visit all of the locations where KNX can be found, which is not just on one stand:

Secondly, make sure you visit also the KNX Members with their own booths at Light + Building. Currently over 150 KNX Member are present there. You can use this map/guide to plan your visit properly.

We look forward to welcoming you there!