The “Internet of Things” is a buzzword in the world of information technology. Although it has yet to become part of common parlance, the term has been used for some time within expert groups, and promises a new development boost. Everyday objects become intelligent and communicate via the Internet. According to visionaries, by 2020 around 50 trillion of such objects will communicate via the Internet. Far from being pie in the sky however, the Internet of Things is already a reality. The KNX Standard has formed part of this global IoT world for some time. By the introduction of the KNX Web Services (KNX IoT 1.0), KNX underlines its leading position and opens new ways in the operation and visualisation of KNX systems. 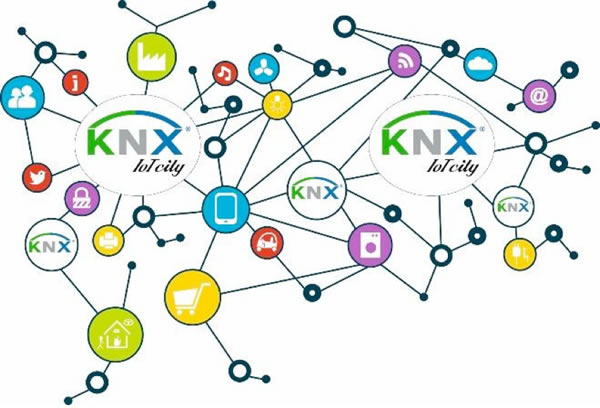 Since a long time the Internet of Things (IoT) has found its way into nearly all areas of life – even in building automation. Global players like Google or Apple penetrate into this market of the future and try to emphasize their philosophy of intelligent buildings by networkable products. When trying to find in the vast number of systems a solution suited for him the user gets more problems than answers. For instance the hardwired window contact of system A is not capable to communicate with the wireless valve drive of manufacturer B. In addition proprietary automation solutions usually require a central server for the exchange of data between the installed components, which cannot communicate directly with each other like it is possible in case of KNX.

KNX is a ‘Thing’ on the Internet since a long time

Since the beginnings of the technology KNX disposes over all IoT features. KNX devices can be seen as physical objects, which are clearly identifiable and able to exchange data. The media TP, RF, PL and IP take care of the network connectivity. KNX itself is an “Internet of Things”. Amongst others the main features of this decentrally organized bus system are the compatibility of the devices and the possibility to communicate with each other. This ensures for the installations e.g. a high degree of availability.

However: It requires the technical expertise of KNX installers combined with the effort for the parameterization. That is, as a general rule, no problem for KNX installers but in fact already for IT experts. Standardization does not exist. If one tries to access from the world of internet to the “Thing” KNX, i.e. the building automation, in a simpler way, new ways have to be opened.

KNX Association has recognized this trend of the times and developed the corresponding solution “KNX Web Services” (KNX IoT 1.0). Web services are self-contained modular software components that can be described, published and activated via the web. Usually they are employed by applications and not by persons. Thus, a simple and multi-faceted communication between web services and systems of building automation is possible.

A Gateway maps the KNX Project

The solution KNX IoT is realized via gateways between the KNX network and the world of internet. On one side operation panels, building management, smartphone and others communicate via web services with the gateway. Thus, the app of a web client is able to search data in the web service gateway with unified text telegrams and to transfer them. On the other side the accustomed KNX protocol has to be found. However, in order to recognize from the side of the IP infrastructure the parameters of the KNX system the ETS project has to be exported into the KNX WS-Gateway. For this purpose the new ETS Exporter App is available. The KNX installer has got the possibility to export all project data or only parts of it. When doing so the parameters have to be clearly marked. Also supplementary data can be transferred.

By KNX IoT the building automation resp. the smart home comes closer to the virtual world of the internet. It becomes simpler to use data thereof for automated functions, to present values and states of a KNX installation via the internet and to evaluate them. Just think of sensor values and consumption data of energy usage, which can help to optimize the energy management. The open data exchange between IT systems and building automation systems enables improved applications with high multiple benefits.