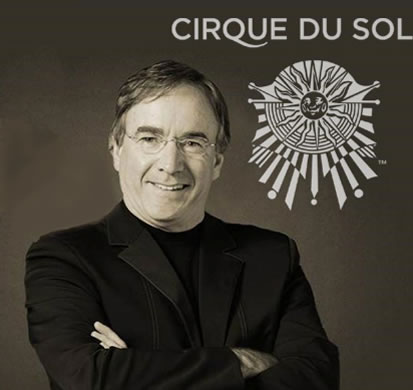 For over 30 years, Cirque du Soleil has been at the cutting edge of live entertainment creation and production with shows such as Varekai, Amaluna, TORUK – The First Flight, inspired by James Cameron’s Avatar, The Beatles LOVE and Michael Jackson ONE combining stunning acrobatics, theatrics, visuals and music. Cirque du Soleil has consistently shown how creative expression can benefit from the adoption of the latest audio-visual technologies when used to enhance and compliment a show’s key storylines. Today, the company operates across five continents and is the world’s largest theatrical production company.

Before taking on his current role Lamarre enjoyed a long and distinguished career in international business development in the creative industries, including time spent with the TVA Broadcast Group, National Public Relations and Burson Marsteller.

Lamarre is currently responsible for Cirque du Soleil’s business strategy and financial growth. He balances this with maintaining the integrity, culture and values of the company alongside overseeing Cirque du Soleil’s creative department and the creation of all news shows. He believes that creativity is the key to successful commerce and cites
his ability to alleviate fear for business people who look to operate on a global scale as one of his key attributes.

Two of Lamarre’s greatest business achievements involve the music icons Michael Jackson and The Beatles. Cirque du Soleil’s production of LOVE, based on The Beatles’ music, is the only live show ever agreed upon by the group. The celebration of Michael Jackson’s work ONE was produced after fierce competition with other entertainment giants working with the performer’s estate. Both accomplishments highlight Lamarre’s highly developed business skills and his ability to connect and establish a close rapport with the giants of the creative community. In 2012 he collaborated on the creation of the C2MTL Conference, a one-of-a-kind coming together of leading creative and business professionals.

Lamarre said: “As emerging technologies continue to grow their influence on live entertainment, it is timely for me to participate in ISE 2017. I will have an opportunity to share my vision on how new technologies will have a huge impact on artistic content.”

Integrated Systems Events (the producer of ISE 2017) Managing Director Mike Blackman commented: “ISE and its co-owners CEDIA and InfoComm International are proud to welcome Daniel Lamarre as our Closing Keynote for ISE 2017. It will be fascinating to hear the inside story of Cirque du Soleil from such a respected and successful business development expert.”