Following exhibitor and exhibition space records, Light + Building 2014 sets a new visitor record with over 210,000 people at the fair

Internationality up again – almost one in two visitors from outside Germany

Light + Building once again provided an impressive demonstration of its role as the world’s leading trade fair for lighting and building-services technology. The world’s biggest exhibition of lighting, electrical engineering, house and building automation and software for the building industry ended today with a new record on the visitor side: during the six days of the fair, 211,500 trade visitors (2012: 195,582[1]) from 161 countries came to Frankfurt to find out about the latest innovations and solutions of the manufacturers taking part, an increase of eight percentage points. At the same time, the level of visitor internationality rose by three percentage points to 47 percent meaning that almost one in two visitors came from abroad. The best represented visitor nations after Germany were Italy, the Netherlands, France, China and Austria. There were also significant increases from numerous expanding markets, such as Russia, South Africa, Mexico, Turkey and Indonesia. Particularly striking was the return of visitors from South Europe with high double-digit rates of growth characterising visitor numbers not only from Spain and Portugal but also Greece. 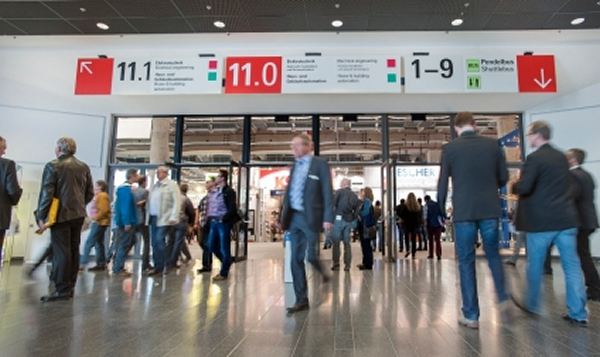 The visitor structure underscored the significance of Light + Building as the world’s leading trade fair for lighting and building-services technology. For the industry, the large proportion of foreign visitors is an important factor for a positive assessment of the fair. “Hardly any other fair in the world is distinguished by as many innovations as Light + Building. Complex and highly efficient systems are developed in next to no time in the fields of lighting and building-services technology. In this respect, Light + Building 2014 exceeded all expectations by far and left no doubt about its position as the world’s leading trade fair for the sector”, said Dr Klaus Mittelbach, Chairman of the Board of the German Association of the Electrical and Electronics Industry (Zentralverband Elektrotechnik- und Elektronik­industrie e.V. – ZVEI).

With 2,458 exhibitors (2012: 2,302[2]), an increase of seven percent over the previous event, as well as an increase of four percent in the area occupied by the fair to 245,000 square metres (2012: 235,0001), Light + Building 2014 set new records in all relevant areas. Hence, the conclusions drawn by Wolfgang Marzin, President and Chief Executive Officer of Messe Frankfurt, are correspondingly positive: “Light+Building is in a class of its own when it comes to lighting, light design and the future-oriented field of building and energy management. Over the last six days, manufacturers have demonstrated the great energy-saving potential offered by the use of innovative, market-ready technologies.” The spotlight of this year’s Light+Building was on energy efficiency, a vital aspect of the shift away from nuclear energy, which is frequently neglected in the public debate.

As in previous years, one of the biggest groups of visitors comprised the German installation trade. Ingolf Jakobi, Director General of the Central Association of the German Electrical and Information Technology Trades (Zentralverband der Deutschen Elektro- und Informationstechnischen Handwerke – ZVEH), emphasised the importance of Light + Building for the trade: “We achieved a great success with the focus on energy efficiency. The E-House and the Energy Efficiency Award given in cooperation with the ZVEI were super visitor magnets. For the electrical-installation trade, Light + Building is becoming an increasingly valuable platform for the exchange of ideas and information with politicians and our contacts in the ministries.”

The responses of German exhibitors to questions about the current economic situation in the sector were extremely good. 85 percent of exhibitors interviewed in a survey conducted by Messe Frankfurt said the economic climate was satisfactory to good. Both exhibitors and visitors gave the fair top overall ratings. On the exhibitor side, it reached around 90 percent; on the visitor side, it remained at the extraordinarily high level of 98 percent.