How to become a KNX certified Training Centre 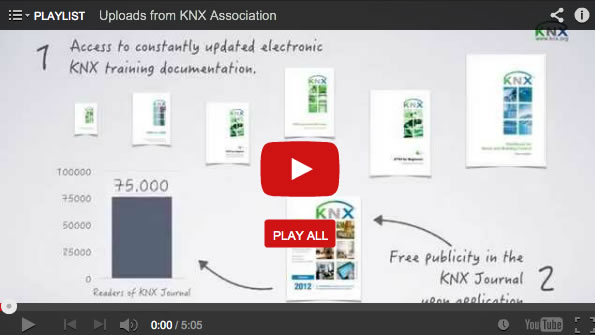 Successful candidates chosen for compelling plans to design sustainable smart cities to meet their citizens’ needs for a quality living environment IEEE, the world’s largest professional organization dedicated to advancing technology for humanity, today announced the municipalities of Wuxi, China and Trento, Italy, which were among hundreds of candidates that submitted applications to participate in […]

KNX and the Smart City Features as Keynote at Integrate 2014

REVEALING THE “SMART CITY” AND THE FUTURE OF SMART BUILDINGS AT INTEGRATE 2014 In this exclusive Australian appearance Joost Demarest, Chief Technical Officer of the KNX Association based in Belgium, will share his experience, technical expertise and vision for the future of smart buildings at the Future Trend Talks, the highly coveted seminar series at […]

Hereward College, Coventry, is a general Further Education college that provides day and residential places to disabled and non-disabled students, including those with cognitive, physical and sensory impairments. The focus of the college is to provide a 24 hour curriculum, in an ability-inclusive environment, that promoting independence and individual independence. This can include the use […]

Focus on best practice and delegate experience in London, Berlin, Milan and Amsterdam The Smart Building Conference – a joint venture of InfoComm International and CEDIA – is to expand significantly in the coming months with the staging of four events addressing some of Europe’s most energetic markets for audiovisual technology and systems integration. Conference […]

Product Article: The JUNG F50 Range of Push-button Interfaces – an Impressive Combination of Design and Technology

By Andrew Taylor, JUNG. In 1912, Albrecht Jung GmbH & Co. KG was founded in Schalksmühle, Germany. Over the last 100 years, the company has become established as a specialist in electrical switches and systems under the motto ‘Progress as a Tradition’. Having its own subsidiaries and represented by a number of agencies all over […]

Business: Lessons that KNX Manufacturers Can Learn from the Big Players

By Jesús Arias García, KNXin. I got so excited about an interview with Tony Fadell by the UK edition of Wired magazine, that I put aside the article I had already written for this month, and offer you this instead! For those unfamiliar with Fadell, let’s just say that he played a big part in […]

By Sophie Thomas, Ivory Egg. There has been a definite surge in public awareness surrounding home automation recently, thanks to the likes of Nest, Hive, and most recently, Apple HomeKit. No doubt some systems integrators will sigh with a heavy heart each time more so-called ‘smart home’ technology is announced, as they fear the end-user’s […]

By Simon Buddle, KNXtoday. As many small systems integration companies grow, the likelihood is that each year they will add another product or technical capability to their armoury. This gradual growth enables us to navigate successfully through the shark-infested waters of the larger project. Over-stretching a company in resources or technical capabilities, by trying to […]

By Dr. Thomas Weinzierl, Weinzierl Engineering GmbH. While KNX has grown into the most important building automation standard, Ethernet has evolved into a universal communications solution that can also be employed in automation systems. Because of their different system characteristics, KNX and Ethernet complement each other well. The advantage of the KNX bus is that […]