BSRIA is pleased to present the results of its latest Smart Home/Light Commercial market study produced in January 2017. The study, which consists of individual country reports on China, France, Germany, Netherlands, North America and UK, is forecasting a total global growth of 20 per cent in the Smart Home/Light Commercial market in 2017, with the largest growth being predicted for the UK market with a growth rate of 29 per cent. **The study segments the market into stand-alone products and whole home products and also analyses the value of system integration (value add) and service and maintenance.

The total value of the global market is forecast to be $15.8 billion in 2017; the US market remains the largest single market forecast at 29 per cent of the total market value. Despite the maturity of the US market, the growth forecast is expected to be in line with the global increase in value of 20 per cent, with stand-alone products being the segment showing the largest growth at 27 per cent.

The study is also forecasting rapid growth in sales of both products and system integration, but due to the infancy of the market, a lower level of sales for service and maintenance.

The reports provide an outlook until 2021 when it is forecast that the total global market will be worth $29.8 billion. 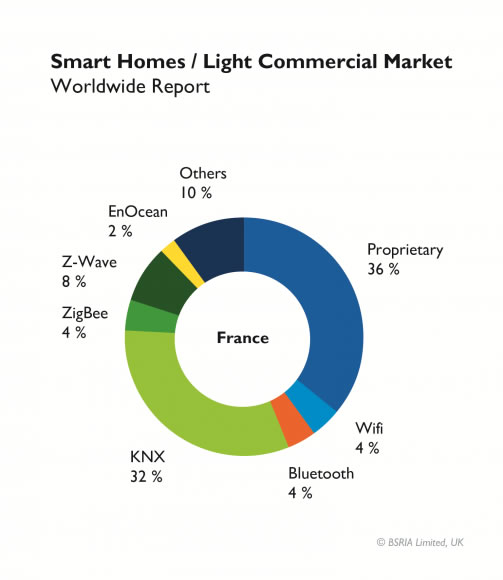 In terms of communication protocols, whereas the market in North America is dominated by proprietary protocols, the study shows a significant increase in the penetration of KNX in Europe and China. The typical KNX wired solution has traditionally limited its deployment to new-built installations: the launch of the KNX RF (wireless) version in 2010 has enabled it to gain a significant market share, placing it in third place behind proprietary communication protocols and Wi-Fi, but with the advantage that it can be integrated with KNX wired products.

In Germany the whole home solutions market is heavily dominated by KNX (with a share of 56 per cent), which was developed largely under the auspices of major German and European smart building suppliers. While proprietary protocols still have a significant share, none of the other protocols have yet gained critical mass.

The whole home solutions market in the UK is not dominated by any one communication protocol. All protocols have their own strengths and weaknesses, and many installations will incorporate more than one protocol. The BSRIA study found that KNX has a 27 per cent market share in the UK’s whole home smart systems segment.

KNX remains the most popular of the non-proprietary protocols in France with 32 per cent of the market. It is a long established communication protocol in this country, but it should be pointed out that proprietary protocols are also very strong in France. Proprietary protocols may have the advantage of not adding additional costs to the devices and give the biggest freedom to the manufacturer: however, they seriously complicate the integration with other systems. The industry has not found a consensus on the open standard yet and the convergence issue is still a threat to the progression of the smart market. Since EDF, as the leading energy supplier in France, took the decision to offer among others the possibility to transport metering data via a KNX interface in its Linky smart meters, the importance of KNX is expected to increase in France.

Proprietary protocols (15 per cent) are well represented in the Netherlands, but KNX has a market share of 34 per cent in whole-home smart home systems, thus becoming the standard for home and building control in the Netherlands.

Wired systems account for the vast majority of the overall market in China for whole-home smart systems. Of the total whole-home smart home market, nearly 38 per cent uses proprietary protocols and about 42 per cent was accounted for by KNX systems. The KNX protocol constitutes a “European standard for smart home installation” in China, which has become the only approved Chinese standard (GB/T20965) for Home and Building Control in 2013. A large number of protocols are used in wireless products in China, however, mostly for stand-alone smart products/subsystems, including Wi-Fi.

Wi-Fi’s disadvantage is, however, that it consumes more energy, and devices working through Wi-Fi can slow down internet connectivity at home.