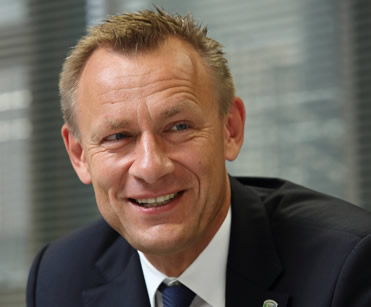 The KNX Association was founded in May 1990, and will celebrate its 25th birthday this year. What originally was a club of nine manufacturers (then still called EIB Association) has evolved into a community of almost 400 manufacturer members.

The Association is still true to its original objectives: the creation of an open standard for home and building control; third-party certification of the resulting products; and development/distribution of a manufacturer-independent software tool to design and configure installations based on certified products (the ETS – Engineering Tool Software).

Having worked for a KNX manufacturer previously, Heinz Lux became CEO of the KNX Association in 2006. In this exclusive interview with KNXtoday, he looks at the Association’s achievements so far, how the market is developing, and how the Association plans to respond.

KT: How has KNX Association changed over the last 25 years?

HL: One important milestone in the Association’s history was when KNX became the worldwide standard for home and building control as ISO/IEC 14543-3 through the publication of the protocol and the transmission media. This process was started in 2003 by achieving the status of European standard as the EN 50090 series, followed three years later in 2006 with the publication as an ISO/IEC standard.

Since then, KNX has seen a remarkable evolution, with an exponential growth in the number of manufacturer members (380 at the time of writing); certified training centres (307); certified partners, i.e. people who have passed the exam at a KNX-certified training centre (45,000); national groups, i.e. associations which promote the standard in different national markets (43); and accredited test labs (11). The current figures for this large community speak volumes.

KT: How do you see the home and commercial markets changing?

HL: Throughout its existence, KNX has been confronted – both in the residential and commercial markets – with a multitude of systems that are proprietary, i.e. each manufacturer has its own unique control system. Initially, a proprietary solution may seem like the right choice for the manufacturer, as it protects their investment, but it hinders the market as a whole.

If we want automation technology to proliferate to all homes and buildings, we have to reassure the building owner, be it a private person or a landlord of an office building, that all equipment in the building will work together seamlessly. Not only does this ensure freedom of product choice, it means that the building is future-proof, and, perhaps most importantly, that it is easy to maintain without a plethora of gateways. That is why KNX has been driving home the same message since it was founded: if we want to replace traditional installation techniques with modern home and building automation, there must be proven interoperability between products from different manufacturers. And as far as I can see, this message is finally connecting with people around the world, both in the home as well as commercial sectors.

KT: What about the critics who say that the days of KNX are numbered?

HL: I sometimes hear this said, especially regarding home automation, due to the emergence of solutions from a number of world players. I would argue that this is not a threat to KNX, but an opportunity to finally put automation on the map for everyone, so that it becomes the norm rather than the exception.

KNX has some unique value propositions, and I am convinced that these will ultimately turn out to be the right answers to the challenges in the field of home and building automation.

HL: There have been quite a few, but two clearly stand out: the continued penetration of KNX into new markets with the founding, for example, of KNX national groups in Japan, Mexico, etc, as well as the unprecedented success of the new generation of our uniform KNX design and configuration tool, ETS5, which was launched in October 2014.

KT: How is ETS5 being received, and what difference will it make to the market?

HL: The success of ETS5 has exceeded even our wildest dreams: as soon as ETS5 was released, we distributed as many licenses as had been issued during the previous nine months. It clearly proves that KNX has made a number of correct design choices for the new tool.

To start with, data concerning products and projects is now handled without the need for a database engine, which considerably speeds up working with the tool. Secondly, it is the first version of the tool that supports all KNX transport media as defined in the KNX standard, including KNX Radio Frequency. This medium is of paramount importance for the increased use of KNX in residential projects mainly, but also in commercial applications thanks to the emergence of KNX-compliant battery-less devices. There are many more other interesting new features of ETS5, which are listed in the ETS5 flyer for experts.

KT: How is the MyKNX portal being received, and how do you plan to develop it?

HL: The modernisation of the ‘Online Shop’ to become ‘MyKNX’ was also the right thing to do. With our community of manufacturers, training centres, partners, etc, KNX Association is doing more than just distributing software licenses. Many of the people listed in the MyKNX database are not simply the person at the company who was responsible for purchasing a software license, they are, for instance, the person who wants to be listed as a KNX-certified partner on our website and who wants to be able to access their KNX partner certificate electronically, or be able to change their contact details themselves. Or they could be a tutor at a KNX-certified training centre, wishing to download the latest version of the electronic KNX training documentation, and so on.

The Association has many ideas for further evolution of the portal, making it the central access point for anybody involved in KNX. So as a MyKNX user, stay tuned for more interesting future developments!

KT: Where and how will you be looking to develop in 2015?

HL: In 2015, the founding of KNX USA and the start of activities in the rest of North America is a top priority. In addition, KNX will continue to promote the KNX City concept – its answer to the need for ‘smart cities’. From a KNX perspective, the smart city is the binding link between the smart home/building and the smart grid.

In the grids of tomorrow, energy will be distributed in a much more automated way than is currently the case. In most countries, energy production will be more decentralised due to increased production via renewable sources such as wind and sun. As these energy sources fluctuate, homes and buildings will be an essential element in the grid’s stability. For example, when energy production is high, customers will be encouraged to consume more or store more energy (for example in an eCar) thanks to tariff incentives offered via the smart grid. And when energy production is low, incentives will be offered to limit energy consumption.

KT: How do you plan to celebrate KNX Association’s 25th anniversary?

HL: The 20th of October 2015 has been scheduled as ‘Worldwide KNX City Day’. There will be simultaneous KNX events held in more than 50 countries around the world, all of which will be broadcast live over the Internet. More details will be announced nearer the time, but make sure you save the date!

KT: What other plans/priorities do you have for 2015?

HL: In 2014, the KNX Executive Board started work on a number of strategic projects, that will be continued in 2015:

Firstly, through an initiative of the KNX Technical Board, we are standardising a KNX web service gateway. The goal is to launch an ETS app that can configure such gateways based on ETS project data, and allow any client, which could be a PC or even a mobile device, to access data points in an underlying KNX system via IT web services in a standardised way.

Secondly, work has already started on a future extension of the ETS tool to support KNX security devices, which will be publicly shown at Light+Building 2016.

Thirdly, the KNX System Group has been entrusted with the task of investigating how the current KNXnet/IP specifications can evolve to become usable in IPv6 networks, and how KNX technology could be adapted to be ready for the age of the Internet of Things.

Last but not least, the Executive Board has clearly confirmed that there is a need for a new generation of the ETS that simplifies KNX installation design, thereby not only allowing design on a PC, but also on mobile devices such tablets and smart phones. This project has already been started under the working title ‘ETS Core’, and results will, again, be publicly shown for the first time at Light+Building 2016.

KT: What opportunities are there for the KNX community to interact with KNX Association during 2015?

HL: Of course, as in 2014, KNX will continue its activities around the world, organising events and conferences in collaboration with the now 44 national groups. KNX International itself will again make an appearance at the ISE show in Amsterdam in February, at the ISH fair in Frankfurt in March, and at various other events. Please do come and say hello, or take advantage of our popular webinar infrastructure for regular, interesting and free webinars on many different topics

KT: What is your advice to anyone considering joining KNX Association?

HL: As already mentioned, KNX is the one of the best answers to the need for open standards for home and building control, ensuring seamless interoperability between products from different manufacturers. A proprietary solution is not future proof and is, in the long run, a dead-end street.

KNX is unique in the world of home and building control. It has developed over 25 years, has a large and active community in 125 countries, and allows you to work with many thousands of products with just a single software tool.

For anyone new to KNX and ETS, please visit the eCampus – the best way to acquaint yourself with KNX technology. The eCampus is free of charge – all you need to do is register as a new MyKNX user – and at the end of the eCampus, you will be rewarded with a free ETS Lite software package. After that, if you want to continue designing and configuring KNX installations, all you need to purchase is the ETS5 dongle.

Heinz Luz is the CEO of KNX Association, the organisation behind KNX, the worldwide standard for home and building control.