The Smart Buildings Show, held at the Barbican, London, 7-8 November, was hailed a success by KNX exhibitors.

Marketed as the only UK exhibition and conference to focus on smart commercial buildings, Smart Buildings Show 2018 played host to almost 50 exhibitors, and attracted professionals from all key areas involved with smart buildings. 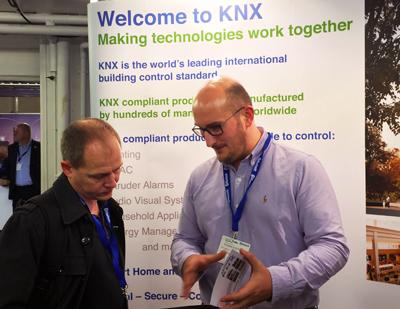 According to Stephen Payne of B.E.G., “This is the best smart building show in the U.K. It’s focussed on smart controls and its strength is that it attracts all the right people; consultants, electricians, developers, installers and architects. What’s more encouraging is that more than half of visitors we’ve spoken to have already heard of KNX.”

According to Paul Foulkes of Wago, “This show attracts the right people, and they are looking for a one-stop shop, which is what KNX offers, for both commercial and residential projects.”

The conference programme, which had a strong focus on the IoT, offered a variety of presentations, including two by KNX UK’s Iain Gordon. The first, an ‘Introduction to KNX – Get a backbone’ explained the benefits of using the KNX bus architecture in a building. The second, ‘The Fundamentals of Security’ included some excellent practical tips on how to make installations more physically and electronically secure, and explained why KNX Secure is an ideal choice.