As Integrated Systems Europe continues to expand its coverage of vertical markets served by the AV industry, the broadest ever range of thought leaders and subject experts will be speaking at ISE 2019 in Amsterdam. 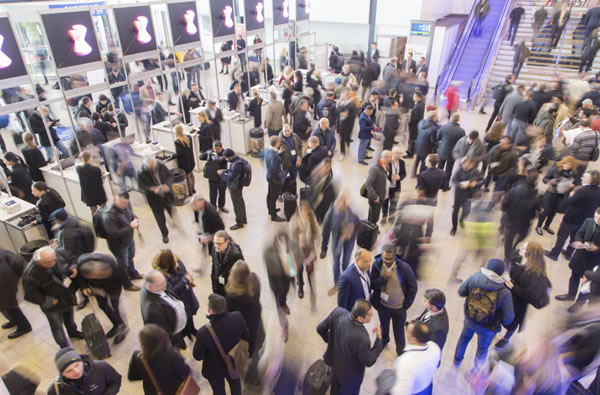 ISE is committed to delivering an extensive breadth of expert opinion, analysis and debate across all the market sectors that the show addresses. At ISE 2019, all educational and professional development content is being presented under the umbrella title ‘Learn, Discover, Be Inspired’. This full programme has been developed through close cooperation with AV industry bodies – particularly the show’s co-owners AVIXA and CEDIA – media partners and other independent associations.

Most recently announced is the Closing Keynote on Friday 8 February. This will be delivered by Tupac Martir, creative director of multidisciplinary art, design and creative production group Satore Studio, and co-founder of the studio’s sister venture Satore Tech. He has been described by Vogue as “the visual artist and creative director behind some of the most important events in the world”. Satore clients include BMW, Dior, the Saatchi Gallery, Elton John and Beyoncé.

The ISE 2019 conference programme has drawn an impressive array of experts from a wide range of sectors and disciplines. There are no fewer than ten conferences taking place during ISE 2019, five of which are being held at the Hotel Okura, a short distance from the RAI Amsterdam.

At the Smart Building Conference, opening keynoters include award-winning architect Aryanour Djalali, CEO of world-famous DNA Barcelona Architects. Flying in from New York to talk about the relationship between smart spaces and experience will be Michael L Schneider, Creative Technology Director – Hardware for Gensler, the collaborative design giant ranked number 1 by Building Design in the 2018 World Architecture Top 100.

Amelia Kallman will chair the XR Summit ISE. A futurist, communicator and consultant, Kallman specialises in the impact of new technologies on business and on our day-to-day lives. She has recently written a report on the emerging risks of virtual, augmented and mixed reality for Lloyd’s of London.

Jose Avalos, General Manager of Visual Retail and VP of the IoT Group at Intel, leads the chipmaker’s digital signage programme. He will present a keynote at Digital Signage Summit ISE.

Among the array of international speakers at Digital Cinema Summit ISE will be renowned cinema industry consultant Michael Karagosian. He was part of the team that launched Dolby Surround Sound, and was also Technology Advisor for the National Association of Theatre Owners for the decade of the transition to digital cinema.

The opening keynote at DCS ISE will be presented by Jan Runge, European head of the International Cinema Technology Association. Previously CEO of trade body UNIC, the International Union of Cinemas, he is also an independent analyst and advisor to the cinema industry worldwide.

Dr Gill Ferrell will be moderating the AVIXA-hosted conference What’s Next… Higher Education Experiences. A consultant with extensive management experience in higher education, she has led and advised on many implementations of IT within teaching, research and administration functions. She is currently the leader of the EUNIS (European University Information Systems) e-Learning Task Force.

Taking part in the other AVIXA conference, What’s Next… Enterprise AV Integrated Experiences, will be experience designer and communication strategist Lisa Perrine, CEO of Cibola Systems. Her company has completed over 1,000 consulting projects for clients including Sony Music, United Talent Agency and The Annenberg Foundation.

Dubbed ‘the father of home theatre’, Theo Kalomirakis of TK Theaters has designed private cinemas for world leaders, sporting legends and film stars. He is one of three experts giving CEDIA’s new full-day Home Cinema Design Masterclass. The association is also offering an extensive 36-course education programme; an All Access Training Pass gives unlimited entry to CEDIA courses of up to half a day’s duration.

Hospitality Technology Next Generation, a trade association dedicated to driving best practice in the hotel industry through the adoption of technology, is presenting Hospitality Tech Summit by HTNG at ISE 2019. Its COO, David Sjolander, has worked on both sides of the industry: as a hotel IT executive he was responsible for technology at over 1,000 properties in 70 countries, and he has also worked in a product management role on a system connecting 90,000 hotels worldwide to over 1,000 online distribution channels.

Emmy Award-winning sound designer Scott Willsallen will be giving a keynote at the AGORA conference on sports venue technology. A director of the Sydney-based consultancy Auditoria, Willsallen has worked on multiple Olympic and Commonwealth Games Ceremonies.

Donato Masci is an acoustic designer and consultant, working for Florence-based company Studio Sound Service. He will be presenting at AudioForum @ ISE, which for its 2019 edition will discuss sound environments, the listening experience and psychological factors. The event is designed to appeal to those who manage spaces that feature audio systems, as well as to audio professionals.

In addition, the Main Stage, located in the centre of Hall 8, will present a full programme of thought leadership sessions across the four days of the show, produced by ISE, show co-owners AVIXA and CEDIA, and AV Magazine. Speakers here will include:

• Joseph Aamidor, a consultant specialising in the smart building market, who will discuss the application of blockchain to smart building;

• Alex Sanfilippo, Director of Engineering at integrator Kraftwerk Living Technologies, who, in an AVIXA-hosted session, will describe how the company built its award-winning 007 ELEMENTS experience;

• Ahmed Refai, Regional Commercial Director of Archimedia, who will reveal the secrets of a CEDIA Award-winning fully immersive home cinema project in a luxury new-build development in Dubai.

Additionally, both AVIXA and CEDIA will be offering ‘bite-sized’ training on the show floor, with no need for advance booking. AVIXA’s FlashTracks are 20-minute education sessions held on the association’s stand (13-N110), covering topics within User Experience, AV/IT, Design and Emerging Trends. They are free to attend for AVIXA members.

CEDIA Talks will be taking place on the CEDIA stand (1-E20), addressing ten different subjects across the four days of the show. Free to attend, these 20-minute sessions are designed to introduce attendees to new disruptive technologies – such as Web 3.0, Wi-Fi 6 and 5G – and challenge established ways of thinking.

Mike Blackman, Integrated Systems Europe Managing Director, commented: “This is a compelling line-up for ISE 2019. With top-level speakers throughout the show, our biggest ever conference programme and a full roster of thought leadership sessions on the Main Stage, we’re delivering on our commitment to provide content tailored to our everbroadening attendee base. I’m very grateful to AVIXA, CEDIA, our media partners and all the other content partners who are working with us to deliver this strong programme, which provides numerous opportunities for attendees to ‘Learn, Discover, Be Inspired’.”