“Siri, dim the lights in the living room.”
“Siri, we’re going to bed.”

These are just some of the commands that KNX-equipped homes can now react to through Siri voice control, thanks to xxter, a Dutch manufacturer of professional home automation products since 2006.

Xxter has closely coordinated the creation of the ‘Pairot’ KNX bridge with Apple, resulting in the Pairot being the first KNX bridge to be allowed to officially proclaim that it ‘Works with Apple HomeKit’. 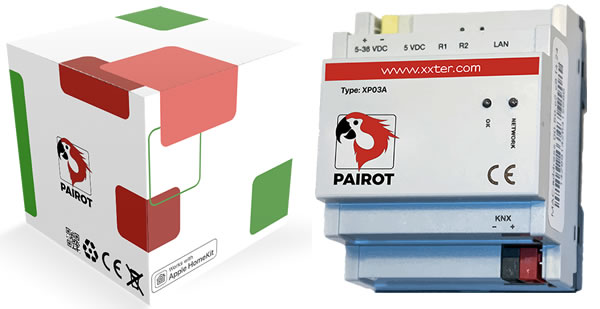 Pairot is connected to the home network and the KNX installation by the installer. With simple configuration, all available components in the home can be voice controlled through Siri using Apple products such as iPhone, iPad and AppleTV. Of course, Pairot is also ready to work with Apple’s new HomePod and can also be used with the Amazon Echo.

Through Pairot, Siri can easily control the available switches, dimmers, shutters and thermostats and can read sensor values such as temperature, light intensity and humidity if such sensors are installed in the home.

KNX is known as an international standard, a European standard and a Chinese standard, and there are more than 70,000 certified installers worldwide who have adopted this open standard.

To date, there are over 400 registered manufacturers of KNX products, all working together perfectly. This makes KNX future proof, so you can rely on brand-independent and seamless integration of the entire automated home. Now, thanks to the Pairot, the KNX-automated home can be controlled in a natural way by voice through Apple’s Siri.

The Pairot is available now.